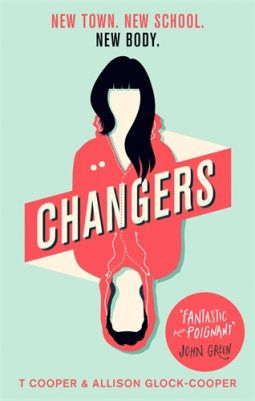 Changers, Book One: Drew by T Cooper and Allison Glock-Cooper
Published by Little Brown Book Group UK 2016
288 Pages
Thank you to Little Brown Book Group UK for sending me this book via Netgalley in exchange for an honest review.
Some teenagers worry about who they’ll wake up next too. Others worry about who they’ll wake up as..
Ethan Miller is about to start high school in a brand new town. He’s finally sporting a haircut he doesn’t hate, has grown two inches since middle school and can’t wait to try out for the soccer team. At last everything is looking up in life.
Until the next morning. When Ethan awakens as a girl.
Welcome to the world of Changers.
Thoughts
What originally drew me to this novel, was it’s concept. I’d already read a similar book about body swapping when I read Everyday by David Levithan (which I loved by the way) and I’d seen several films about the same topic, so it’s something that’s interested me for a while.
Changers, Book One: Drew follows the life of Ethan Miller, who on his first day of freshman year of High School wakes up as a seemingly attractive girl; Drew. It’s from this shock discovery, that he finds out he’s a Changer – an ancient race of humans who live out each of their four years of high school as a different person. After they graduate they can then decide which of the four versions of themselves they want to be, forever.
The plot basically follows Ethan/Drew as he comes to terms with being a changer and how he adapts to being Drew throughout the freshman year. This involves dealing with typical teenage problems such as developing crushes, periods, dealing with bitchiness and sex.
I loved how the character of Ethan developed throughout the novel; from refusing to believe that he was a changer, to finally coming to terms with and accepting who he is. However, despite Ethan’s character developing well throughout, I felt that we didn’t get to see such character development with other characters such as Audrey, Jason, Ethan’s parents and Tracy. Although, as this is a series I’m hoping they develop in later books. I also felt like some interesting features to the plot didn’t get explained as well as they should’ve been, and did leave me slightly dissappointed, but as I said I’m hoping this gets better throughout the series.
There are a few adult type scenes in this book, so I’d say that if you wanted to read this you’d need to be sixteen or over.
Overall, Changers, Book One: Drew was a really interesting, fun read that left me wanting more. I will most certainly be reading the other books in the series.
Rating