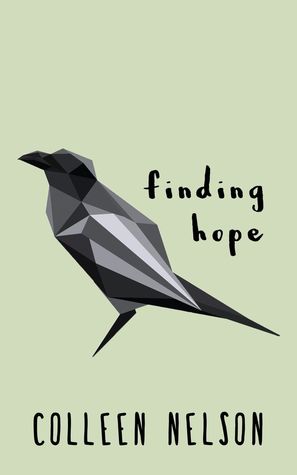 Finding Hope by Colleen Nelson
Published by Dundurn 2016 (E-Book)
200 Pages
Amazon / Goodreads
Thank you to Dundurn for sending me this book via Netgalley in exchange for an honest review.
Hope lives in a small town with nothing to do and nowhere to go. With a drug addict for a brother, she focuses on the only thing that keeps her sane, writing poetry. To escape, she jumps at the chance to attend Ravenhurst Academy as a boarding student. She’ll even put up with the clique-ish Ravens if it means making a fresh start.At first, Ravenhurst is better than Hope could have dreamed. She has a boyfriend and a cool roommate, and she might finally have found a place she can fit in. But can she trust her online boyfriend? And what can she do after her brother shows up at the school gates, desperate for help, and the Ravens turn on her? Trapped and unsure, Hope realizes that if she wants to save her brother, she has to save herself first.
Thoughts
What drew me to Finding Hope was the fact that it was going to dealing with issues that I hadn’t read about in any other book before, and I was really intrigued in seeing how the author dealt with them and how they were portrayed.
Finding Hope is all about Hope, who gets the chance to attended the acclaimed Ravenhurst Academy as a boarding student. Wanting to escape from her town of Lumsville and her drug addict brother, Eric she jumps at the chance. Things start off well as she makes friends and soon gets an online boyfriend. However, things start to take a turn for the worse as Hope soon finds herself hated by the entire school and Eric is soon turning up at the school gates begging for help.
First things first, this book deals with a few sensitive issues such as drug use, bullying, peer pressure and sexual assault. The way these issues are detailed could trigger some people, but for me as I’m an open minded person I went along with a clear head. Yes, some of the detail is graphic but these are issues that happen in real life everyday, so kudos to the author for bringing these to my attention.
Be able to read Eric’s point of view was rather interesting. It was good to be able to get into his mind and find out what caused him to go down such a dark path. When I finally found out what had happened to him I was shocked, but I also finally understood what had driven him to drugs, meth particularly. I did find myself feeling sorry for him a certain times, and his bond with Storm the puppy make my heart wrench.
I found Hope to be somewhat naive and also slightly stupid, especially with the whole ‘online boyfriend’ scenario. Why would she send topless photos to someone she had never met before and who she didn’t even know was real,is beyond me. I found myself screaming at her when she did that. However, like many issues in this book it happens in real life a lot, which I’m guessing is why the author brought it to our attention.
Finding Hope was a short, quick read that brought a lot of issues to my attention. I did find it slightly predictable at parts. For example; I knew what the situation with Hope’s online boyfriend was going to end up like and I did have a slight inkling about how the story was going to end. Despite this, it did keep me interested and I thought the sensitive issues were dealt with in a way that would certainly make people think twice.
Rating

I took myself on a date with my book, a coffee and a brownie. It’s nice to have some me time once in a while and I throughly enjoyed myself 💖
21% Monster is an incredible, action packed, middle grade read! I was utterly immersed in this world and could feel my adrenaline pumping throughout reading. Definitely one that I think will be a hit with those UKS2 readers! I’m getting a copy for my school library for September and will be recommending it left, right and centre! Thank you @usborne_books for sending me a finished copy 📚💛🖤
I feel very lucky to be sent amazing books from some lovely publishers. I received this copy of Resist through my letterbox yesterday from the wonderful people at @barringtonstoke and I’m excited to dive into it! I also know a few children at work who will be fighting to read it.
I picked up this book in my local Waterstones and was instantly captivated by the blurb and gorgeous cover design. I’m currently writing a contemporary middle grade which is going to be tackling some quite tough issues so reading this is going to help me greatly in my writing journey. Also, we need more inclusive middle grade especially with regards to diversity and mental health.
Alex Neptune Dragon Thief is one middle grade that you all need to pick up this summer! It was such an amazing, unique read packed full of adventure with a great message about saving our environment. It’s out on 4th August. Thank you to @usborne_books for sending me a proof copy.
Another #pridemonth book recommendation! The Secret Sunshine Project was just a gorgeous, heart warming read that I just couldn’t put down. I fell in love with each character (well bar one) and I instantly found myself hooked on the plot. Benjamin Dean is such an inspiration to me as an aspiring writer of contemporary middle grade and I can’t wait to read his next middle grade book! 🏳️‍🌈💖
Look at how gorgeous this cover is! Gay Club is the latest YA release by the awesome @simonjamesgreen and I cannot wait to read it! I’ve loved all of Simon’s books so far, and I know this one will be no different! #VoteBarney 🏳️‍🌈
Happy #PrideMonth! This month I am reading as many LGBTQ+ books as I can. I’m also going to try and create a display at work, as I have had a few children asking if I have any books with LGBTQ+ themes.
Oh my god - I’m so bad at this bookstagram thing aren’t I? It’s been weeks since I last posted and I can only apologise. Work has been super busy, I’ve been to a few amazing events and I just haven’t had the time to sit down and take photos. I am hoping to focus more on bookstagram from now on though, as I just don’t have time to keep my blog updated due to a busy life. I’m going to use this to share reviews, thoughts and book hauls!
My Tweets