Wow! March went extremely quick, I literally don’t even know where the month went if I’m honest. However, I am looking forward to the coming months as the weather is starting to get nicer and that always puts me in a good mood.

March was a really boring month for me, as I didn’t really do anything that exciting. All I really seemed to do is work which isn’t really a bad thing as I’m getting paid, which is all good. I did, however have a spontaneous week off work during March, it surprised me but apparently I hadn’t booked all my holiday for the year so it was allocated to me. I certainly wasn’t going to complain about that! I spent the first half of the week just relaxing and enjoying the time off and then for the other half I spent it with James. It was Easter week and as I wasn’t having any chocolate he promised he’d get me an Easter present. We ended up going to Lakeside Shopping Centre on Good Friday and he treated me to this gorgeous Pandora ring. 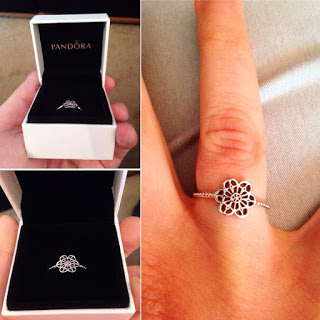 I love it and I wear it all the times when I’m not at work. It’s from Pandora’s new Spring collection and I just want to get more and more now. Whilst we were in Lakeside I got a few bits. I’m happy that I can finally start looking for Spring/Summer clothes now. On Easter Sunday I went home and just relaxed watching films, it was perfect.
I had a concert to go to at the end of the month with James, his best friend Craig and his girlfriend Erica. It was to see a band called Crossfaith who are an electronicore band from Japan. I’d seen them a few times before and they always put on an amazing show so I was looking forward to seeing them again. As the concert was in Brixton, London we all decided to go for a little gander around London first. We went to Forbidden Planet on Tottenham Court Road and then we went to Camden. I adore Camden so I loved the visit there. I love the markets and could spend hours wandering around them. The concert itself was pretty good. I didn’t really like the support acts but Crossfaith put on an amazing show as per usual. I was absolutely shattered by the time the night ended though. A lot of group selfies were taken that day as you can see below. 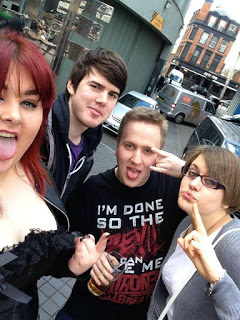 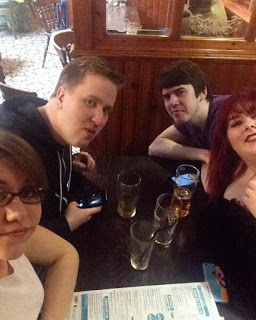 I also managed to get through my March TBR pile and I was so happy about that! I also got a few lovely ARC’s to read and a few signed books after an author contacted me personally about reviewing their books. I think March has been the month where I’ve realised how much book blogging means to me and how much I enjoy it.

Here’s to hoping April will be full of excitement!