Today is my stop on the Forever and One Week blog tour and I have a guest post by author Caroline Cairn about becoming a writer and following your dreams and an exclusive excerpt to share with you! A big thank you to Lola’s Blog Tours for letting me be a part of this. 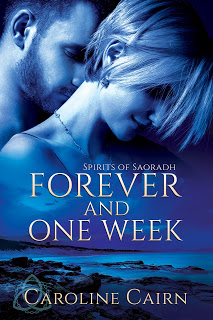 The Spirits of Saoradh, who carry the guilt of a crime they committed when they were alive, now spend their ghostly days in the Void, dark nothingness where time and space are distorted. Until they get bound to a human. As often as needed, that human can call them to the real world, ask them to grant a wish, then send them back to the Void. The Spirits also have to follow strict rules or be punished, unaware that they can earn their redemption through a selfless sacrifice.
Spirit Logan despises the obedience he has to show to his humans, and prefers the enjoyable solitude of the Void. For three years, he has managed to threaten them into severing their bond, thus having his memory wiped of their existence. Except his latest human, an emotionless woman with a secret past, isn’t scared of him. Worse, she doesn’t care about his ability to make wishes come true.
Amazon / Goodreads
Start reading this series now for free! Grab your free copy of Forever Hers here.