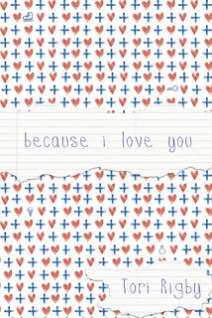 Because I Love You by Tori Rigby
Published by Blaze Publishing
Released 17th May 2016
E-Book
232 Pages
Goodreads / Amazon
Thank you to the Publisher for sending me this book via Netgalley in exchange for an honest review.
Eight weeks after sixteen-year-old Andie Hamilton gives her virginity to her best friend, “the stick” says she’s pregnant.
Her friends treat her like she’s carrying the plague, her classmates torture and ridicule her, and the boy she thought loved her doesn’t even care. Afraid to experience the next seven months alone, she turns to her ex-boyfriend, Neil Donaghue, a dark-haired, blue-eyed player. With him, she finds comfort and the support she desperately needs to make the hardest decision of her life: whether or not to keep the baby.Then a tragic accident leads Andie to discover Neil’s keeping a secret that could dramatically alter their lives, and she’s forced to make a choice. But after hearing her son’s heartbeat for the first time, she doesn’t know how she’ll ever be able to let go.

Thoughts
I’ve read a few YA books about teen pregnancy and have often found it to be a hard topic to do justice. When I found out about Because I Love You I knew I had to read it. From the synopsis it sounded like it was going to focus on relationships and family as well as teenage pregnancy and as soon as I received my copy I was looking forward to reading it.
Eight weeks after getting drunk and loosing her virginity to her best friend, sixteen year old Andie Hamilton gets the news that no teen wants to hear – she’s pregnant. Once the news gets out Andie is disowned by her best friends, bullied so much at school that she drops out and forced to realise that the things she wanted most in life (to be homecoming queen, go to medical school) aren’t going to happen. Lonely and afraid she turns to ex boyfriend Neil for comfort. With him she finds the support she so desperately craves about whether or not she should keep her baby.
First of all, this book touches on some sensitive topics such as teenage pregnancy, abortion, adoption, bullying and sex. All of which, in my opinion were handled brilliantly. It wasn’t preachy and the topics weren’t shoved down your throat. I feel like with Andie’s situation there was no right or wrong way to go about it, it was all about making choices out of love. Also, although I knew that this book was going to be emotional I wasn’t expecting it to make me cry, which it certainly did! There are a few scenes within the book that are highly charged with emotions and they got me sobbing. It was like I could feel Andie’s pain alongside her. It really did feel that real to me.
I loved Andie’s relationship with Neil. When I was first introduced to Neil as a character I admit I didn’t like him much, I just assumed he was going to be a douche. However, as time progressed I actually ended up loving him. The way he didn’t judge Andie or her decisions was perfect and I found some of the things he did for her to be rather sweet. It actually did melt my heart. It was great to read about Andie getting some happiness during a pretty dark time. I also enjoyed reading about Andie’s relationship with her mother. At first you think that because her mother is religious that she isn’t going to support Andie, but that was totally wrong. Her mother supported her throughout and tried not to judge her despite her feelings. It showed true Mother/Daughter love and that the bond they had was unbreakable. Jill was also a fun character to read about. I enjoyed her quirkiness and loyalty to Andie even after not being friends for long. Also I so want to be part of Andie, Neil and Jill’s squad.
If I had to say one thing I didn’t quite like about the book was some parts were somewhat unrealistic in my opinion. I won’t go into too much detail but I found one part involving Neil and an apartment to just not fit with me. Also a part involving guardians didn’t quite sit with me.
Because I Love You is a pretty heartwrenching read that will leave you with a warm feeling inside. The main themes during the read are love, friendship and loyalty. Although it was emotional also, it left me with a smile on my face after finishing the last page. I can’t wait to find out what Tori Rigby writes next.
Rating

Tori Rigby is a YA author of Contemporary and Historical Romances. She longs to live in the Scottish Highlands, and her favorite time and place in history is Medieval England—so much that she’d give up her Internet and running water to go back in time! Tori also writes dark YA fiction as Vicki Leigh.
Website / Facebook / Twitter / Goodreads / Instagram / Tumblr