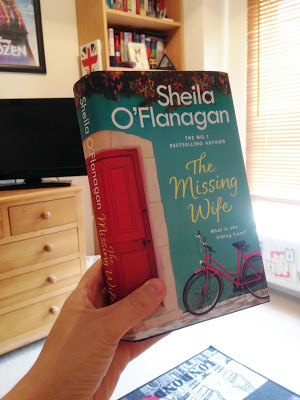 The Missing Wife by Shelia O’Flanagan
Published by Headline Review
Released 16th June 2016
480 Pages
Hardback
Goodreads / Amazon
Thank you to the publisher for sending me this book in exchange for an honest review.
Have you ever wanted to disappear? When Imogen Naughton vanishes, everyone who knows her is shocked. She has a perfect marriage. Her handsome husband treats her like a princess. She’s always said how lucky she is. So why has she left? And how will she survive without Vince?What goes on behind closed doors is often a surprise, and Imogen surprises herself by taking the leap she knows she must. But as she begins her journey to find the woman she once was, Imogen’s past is right behind her…Will it catch up with her? And will she be ready to face it if it does?

Thoughts
I first read a Shelia O’Flanagan novel at the start of the year and having not read any of her work before I was really pleased to say that I thoroughly enjoyed it. So when the chance came for me to read another one of her works I jumped at it and was really excited when The Missing Wife arrived through my letterbox. I couldn’t wait to read it!
Imogen Weir has had enough of her life. Her husband Vince is very controlling and often makes her feel like she’s in the wrong and is hopeless. Her whole life is lived by his rules and after realising she didn’t want to live like that anymore she devised ‘The Plan’ to escape him. After two years in the planning she is ready to put it into action and runs away to a small village in the South of France where she lived as a child. Once there Imogen manages to find an apartment, get a job and make new friends. But all the while worrying if her husband will track her down.
Okay, first of this book covers a very sensitive topic of abuse in relationships. When you hear this I know some of you think just about physical abuse, this book however portrays abuse in an emotional sense. It’s a topic that in my opinion isn’t touched on much so that in itself is something unique. Throughout the book you learn how badly Vince controlled Imogen and how he made her feel like he was the only thing that mattered in her life. People reading this book may be in a similar situation and it may help them. Which is always a good thing. I got so invested in Imogen’s story and just wanted her to realise how much of a good person she was and that she deserved much better. The author I’ll say was very graceful on the issue and didn’t glamorise it, which works well.
The setting of the story was beautiful! I have been to the South of France a few times, but mainly when I was younger so reading about it brought back memories for me. I also have a thing for French culture so I loved reading about the food, the language and the people. I fell in love with all of the locals that Imogen met and I got that sense of community through it. At times it would actually feel like I was there with them, which is what I love when reading books. I love being able to feel like a part of the story.
Imogen as a character was very strong, even though she didn’t know it at the start. You could tell how determined she was to start her life afresh and move on from her marriage. I loved how you got a backstory of her life and it gave me a bigger idea of why she was how she was. I was rooting for her all throughout the story and it was amazing to her see her grow in confidence in each chapter. I know there are two sides to every story which is why I felt that it was important for some of the story to be told through Vince’s point of view. When reading his chapters you can really get the feeling that he didn’t think he was doing anything wrong and that his idea of love was the right idea. It was his way or no way. Although I hated him as a character it was still interesting to get to see things through his eyes.
The Missing Wife was an eyeopener for me as I hadn’t read any books featuring these topics before. I got really involved in the story and I fell in love with Imogen, her friends and the setting of the gorgeous South of France. Having now read two of Shelia O’Flanagan’s books and having loved both I cannot wait to read more.
Rating

Shelia O’Flanagan is the bestselling author of novels such as My Mother’s Secret, If You Were Me and All For You. As well as the bestselling short story collections Destinations, Connections and A Season to Remember. Shelia has always loved telling stories and after working in banking and finance for years, decided to fufill a dream and write her own book. So she sat down, stuck ‘Chapter One’ at the top of the page, and got started. She is now the author of more than sixteen bestselling titles. She lives in Dublin with her husband.
Website / Twitter / Goodreads