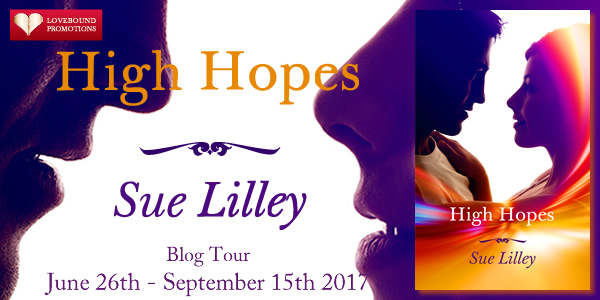 To celebrate the release of High Hopes by Sue Lilley, I shall be sharing an exclusive interview with the author herself as part of the Forget Me Not Blog Tour. Thank you to Lovebound Promotions for allowing me to be a part of this tour.

Hi, Sue! Good to see you on Amy’s Bookish Life. First of all, would you tell us a bit about High Hopes?

In High Hopes, three old friends are confronted with a secret from twenty years ago. An adopted child traces her birth mother. The father knows nothing about her and when the truth is revealed, it rocks them to the core. They think they know everything about each other but are shocked to uncover jealousy and hurt simmering beneath the surface. High Hopes is the name of a place in the book and also represents the theme of having “high hopes” for the future.


How did you get into writing? Was it something you’d always wanted to do?

I was always the child on her own in the corner, lost in the imaginary world of a book. I won a prize at school for writing a short story and was encouraged when my mother cried with pride. After having stories published in womens’ magazines, I moved on to longer works as I always wanted to know what happened next to my characters. I’ve now published two novels – High Hopes and Another Summer. Writing is my therapy and not as expensive as buying shoes.


Where do you get your inspiration and ideas from?

I’ve long had a fascination for secrets, how people go to great lengths to hide things and what happens when the truth comes out. High Hopes is about Grace and Sam who have known each other so long, they’re as close as family. Yet maybe they don’t know each other at all. I normally start with a scene, a character or a snippet of conversation – it helps being such an eavesdropper! Another Summer was inspired by a holiday in Cornwall soon after severe storms and floods. I saw the remains of an ancient bridge destroyed by the river. There was a shiny motorbike trapped in the debris. I started thinking what if…?


Who is your favourite character from High Hopes?

I adore Danny. I wish I knew who inspired him. Readers seem to love him. One reviewer said he sparkles in every scene he’s in. What a great compliment!


And your least favourite?

I try hard to make my characters realistic. I want them to have human dilemmas and to make mistakes. Their flaws are why they’re believable. I like to find something to love about all of them as I don’t want to spend all those hours with people I don’t like. Sometimes I’m thrilled by a surprise development. For example in High Hopes, Dixie starts off a bit downtrodden and ends up saving the day.


If you had to have a soundtrack to High Hopes what would be on it?

Great question! You’ve got me dreaming up an actual play-list. There’s a theme of cheesy eighties rock music throughout the book, sprinkled with a surprise snippet of Glenn Miller. Alannah is named after Alannah Myles of Black Velvet fame because of Sam’s crush on her at the time.


How do you motivate yourself to write? How do you conquer writers block?

I like a brief outline so I know where I’m going. But other than that, the fun is in making it up as I go along. As I have a full-time job, I write mainly at weekends. During the week, I mull over the next bit of the plot so I’m raring to go as soon as I sit down at my computer. I walk around with a notebook and a purple pen, working out my next scene. I have become that mad woman talking to herself on the bus. I can’t say I’ve ever suffered from writers block. My problem is usually the opposite – how to get the words down in the time I have available.


Would you ever branch out and write in a completely different genre?

I’ve always written what I like to read and haven’t run out of ideas yet. Having said that, I recently attended a writer’s conference with two big-name authors of psychological thrillers. They were both fascinating. Maybe I could be tempted to dip my toe in the water one day.


You are a big reader as well as a writer. What is your all time favourite book?

I adore The Shell Seekers by Rosamunde Pilcher. I love everything about it – the wonderful characters, the sense of family history, the vivid setting. I suspect her writing inspired my love of Cornwall, which features in both of my own novels. I read it so many times my copy fell to bits and I had to buy it again. I even read it once to my daughter as a bedtime story when she was a bit too young to appreciate it. But she insists to this day that she loved it.


And lastly, any advice to wannabe writers?

It’s important to put in the effort to learn the craft of novel writing. Although I decided to go down the self-published route, I served my apprenticeship by finishing eight novels first. I was also a member of the RNA New Writers Scheme for several years. I’m confident my books are well written and entertaining reads. I’ve always believed a writer is what you are, not what you become. So I’d say never give up on the publishing dream. Also, write what you love. If you don’t love your work, why will anyone else?

“It was one stolen night. He was my soulmate and I’d never felt more alive. I couldn’t tell him I got pregnant. It would’ve ruined everything. But now his daughter wants to meet him and I need to make things right.” Another tear escaped down her cheek. “Everybody’s going to hate me.”
Three friends are rocked when a 20-year secret blows their world apart. Steamy, passionate, and unpredictable. If you like sizzling love triangles you won’t want to miss it.
Grace has kept her heart-breaking secret for twenty years – a love child she gave up for adoption. She was a penniless student – how could she raise a baby alone? Then she receives a letter out of the blue. Her long-lost daughter is searching for answers.
Her two best friends are married and don’t know one of them is the girl’s father. If Grace confesses now, the marriage will be destroyed and it will surely be the end of their lifelong friendship. But what choice does Grace have?
Set in the wilds of Poldark-country – the stormy cliffs and windswept beaches of picturesque Cornwall – an engrossing saga filled with suspense, simmering jealousy and heartbreak. Can a future be built on the quicksand of secrets and lies? Surely there can be no second chances when three friends discover they don’t know each other at all.

Described as an exciting new voice in Women’s Fiction, Sue Lilley lives in the north east of England, when she isn’t escaping somewhere else in her imagination. She is often found eavesdropping for inspiration. Her first two novels were well received. Another Summer is “an alluring example of its genre”. High Hopes is “a story that holds immense appeal for readers who like plots containing sizzling love triangles.” She is hard at work on her third novel.
Website / Twitter / Goodreads