Today I am really excited to be taking part in the blog tour for Children of Blood and Bone by Tomi Adeyemi. I am currently over halfway through the book and it is AMAZING so far! I am hoping to finish it in the next few days and put a review up.
This tour is a lot different to other tours as we have been given the freedom to do our own post based on what Maji Clan we are in by using the quiz below:

But first, what are Majis I hear you ask? Well, in Children of Blood and Bone Maji’s are the people who have magic. At least they were before the terrible Raid when all Maji were killed by the king and his people. They exist now but without magic running through their veins. They are recognised by their distinct white hair. They are filtered by clans depending on what their magic can do… 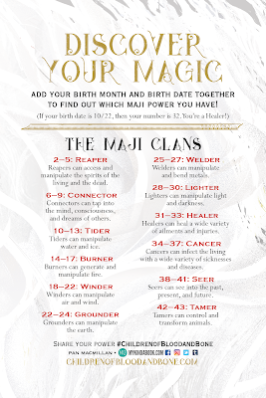 I am a Connector. Our Deity (because who could forget about the Gods!) is Ori. Connectors can tap in the mind, consciousness and dreams of others. It’s a pretty cool clan to be in if I’m honest and one that I think suits me as I have been told I’m a bit of a dreamer.
So, in honour of my Connector status I have decided to put together a mini playlist of my favourite songs relating to dreams and the mind. Hope you enjoy!
I’d love to know what Maji Clan you are all in so do take the test and let me know in the comments.
Children of Blood and Bone by Tomi Adeyemi
Published by Macmillan Children’s
Released 8th March 2018
Goodreads / Amazon

Tomi Adeyemi conjures a stunning world of dark magic and danger in her West African-inspired fantasy debut, perfect for fans of Leigh Bardugo and Sabaa Tahir.Zélie Adebola remembers when the soil of Orïsha hummed with magic. Burners ignited flames, Tiders beckoned waves, and Zelie’s Reaper mother summoned forth souls. But everything changed the night magic disappeared. Under the orders of a ruthless king, maji were targeted and killed, leaving Zélie without a mother and her people without hope.Now, Zélie has one chance to bring back magic and strike against the monarchy. With the help of a rogue princess, Zélie must outwit and outrun the crown prince, who is hell-bent on eradicating magic for good. Danger lurks in Orïsha, where snow leoponaires prowl and vengeful spirits wait in the waters. Yet the greatest danger may be Zélie herself as she struggles to control her powers—and her growing feelings for the enemy.

Tomi Adeyemi is a Nigerian-American writer and creative writing coach based in San Diego, California. Her debut novel, CHILDREN OF BLOOD AND BONE, comes out March 6th, 2018 and the movie is currently in development at Fox with the producers of Twilight and The Maze Runner attached. After graduating Harvard University with an honors degree in English literature, she received a fellowship that allowed her to study West African mythology and culture in Salvador, Brazil. When she’s not working on her novels or watching Scandal, she can be found blogging and teaching creative writing to her 3,500 subscribers at tomiadeyemi.com. Her website has been named one of the 101 best websites for writers by Writer’s Digest.
Website / Twitter / Facebook