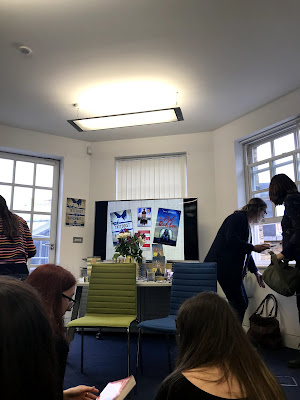 A few weeks ago I was invited by the lovely guys at Hot Key Books/Bonnier Zaffre to attend the Women in History Blogger Brunch on 16th February. This event was to feature Lucy Adlington – costume historian and author of Red Ribbon and Heather Morris bestselling author of The Tattooist of Auschwitz. As someone who is very much into empowering females and the history of the era of WWII I was rather excited for the event.

After getting the tube to Bond Street station I headed to the Bonnier Zaffre office which was only a short five minute walk from the tube. Once I arrived I was given a name badge and headed upstairs where many bloggers were already there. I get a bit nervous when trying to mingle with fellow book bloggers so I did feel a bit awkward. However I soon got talking to Jo from jjbookblog and Jane from bookswithjane and my nervousness eased up.

As this was a brunch there was lots of delicious food on offer ranging from pastries, doughnuts, biscuits and fruit and also tea, coffee and juice. I grabbed myself a danish pastry, a krispy kreme doughnut, a few cookies and some strawberries and also got myself a coffee and continued mingling and chatting until the publicity team from Bonnier announced that it was time to get started. 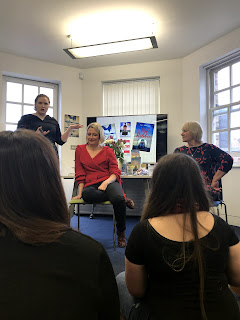 Lucy and Heather entered the room and introduced themselves. Lucy was chairing the talk with Heather and it was very informal. We were allowed to stop them at anytime to ask questions or give opinions and both ladies seemed very relaxed when talking. It was probably the most chilled out discussion involving authors that I’d been to. They both seemed to bounce off each other amazingly and despite the talk getting very heavy at times it was fun to be a part of.
Both Lucy and Heather spoke about how they had come to learn about the holocaust and Auschwitz in particular, this made me think about the first time I came to learn about it and it did bring a lump to my throat. Heather also spoke about bringing The Tattooist of Auschwitz to a younger audience as the YA edition is out on 23rd May. As a Librarian who works with youngsters it made me question if they knew about the Holocaust and if the YA edition could help them learn.
Both authors spoke a lot about the research behind their books, I find it so interesting to hear about how writers research for their novels so I found this part of the talk to be very engaging. Heather spoke mainly about her time spent with Lale and how a lot of what she found out wasn’t in the final book. She wanted to make the book solely about Lale and his experience and how she felt it was her duty to make sure his story was told. Heather also mentioned her upcoming book Cilka’s Journey (about one of the characters mentioned in The Tattooist of Auschwitz who was a real life person) and how researching for this book was a lot harder seeing as Cilka had passed away long ago. She mainly had to rely on speaking to people who knew Cilka. I cannot wait to read Cilka’s Journey which is due to be released on 3rd October. 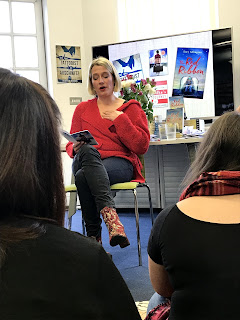 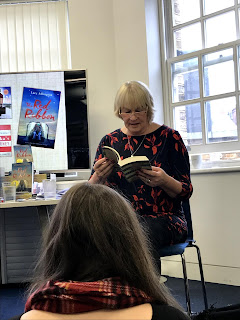 Once the discussion was over we were invited to ask questions if we hadn’t already. I get very nervous about asking authors questions in front of many people but I did enjoy hearing the questions that were asked and the responses Lucy and Heather gave. Then they each gave a reading. Lucy read the first part of her upcoming book Summerland which is about a WWII Refugee. The character is a minor character from her book Red Ribbon. After hearing Lucy read I am really excited to read Red Ribbon then Summerland which is out on 5th September. Heather then read the ending of The Tattooist and having read the book and loving the ending I was excited to hear it and I did find myself welling up.
Once this was over we were invited to take copies of both The Tattooist and Red Ribbon for the ladies to sign. I picked up a copy of each and also a sampler of Summerland. As the queues were quite long I only managed to speak to and get my copy of The Tattooist signed by Heather. I didn’t speak to her for long but I did mention that I am so glad a YA edition is coming out and that I want to get a copy in for the kids at work. Then I grabbed my coat and set of home.

Thank you so much to Hot Key Books/Bonnier Zaffre for inviting me. It was such an incredible event and one that was emotional and thought provoking. I took a lot away from the day and I am now urging everyone to read both books.

I took myself on a date with my book, a coffee and a brownie. It’s nice to have some me time once in a while and I throughly enjoyed myself 💖
21% Monster is an incredible, action packed, middle grade read! I was utterly immersed in this world and could feel my adrenaline pumping throughout reading. Definitely one that I think will be a hit with those UKS2 readers! I’m getting a copy for my school library for September and will be recommending it left, right and centre! Thank you @usborne_books for sending me a finished copy 📚💛🖤
I feel very lucky to be sent amazing books from some lovely publishers. I received this copy of Resist through my letterbox yesterday from the wonderful people at @barringtonstoke and I’m excited to dive into it! I also know a few children at work who will be fighting to read it.
I picked up this book in my local Waterstones and was instantly captivated by the blurb and gorgeous cover design. I’m currently writing a contemporary middle grade which is going to be tackling some quite tough issues so reading this is going to help me greatly in my writing journey. Also, we need more inclusive middle grade especially with regards to diversity and mental health.
Alex Neptune Dragon Thief is one middle grade that you all need to pick up this summer! It was such an amazing, unique read packed full of adventure with a great message about saving our environment. It’s out on 4th August. Thank you to @usborne_books for sending me a proof copy.
Another #pridemonth book recommendation! The Secret Sunshine Project was just a gorgeous, heart warming read that I just couldn’t put down. I fell in love with each character (well bar one) and I instantly found myself hooked on the plot. Benjamin Dean is such an inspiration to me as an aspiring writer of contemporary middle grade and I can’t wait to read his next middle grade book! 🏳️‍🌈💖
Look at how gorgeous this cover is! Gay Club is the latest YA release by the awesome @simonjamesgreen and I cannot wait to read it! I’ve loved all of Simon’s books so far, and I know this one will be no different! #VoteBarney 🏳️‍🌈
Happy #PrideMonth! This month I am reading as many LGBTQ+ books as I can. I’m also going to try and create a display at work, as I have had a few children asking if I have any books with LGBTQ+ themes.
Oh my god - I’m so bad at this bookstagram thing aren’t I? It’s been weeks since I last posted and I can only apologise. Work has been super busy, I’ve been to a few amazing events and I just haven’t had the time to sit down and take photos. I am hoping to focus more on bookstagram from now on though, as I just don’t have time to keep my blog updated due to a busy life. I’m going to use this to share reviews, thoughts and book hauls!
My Tweets