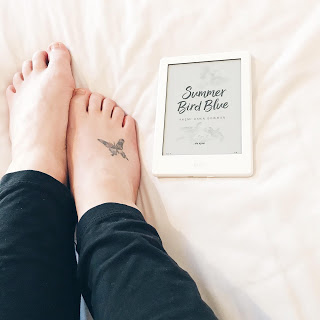 Summer Bird Blue by Akemi Dawn Bowman
Published by: Ink Road
Released: 4th April 2019
Page Count: 275 Pages
Edition: Kindle
Rating: 3.5/5 ★
Amazon / Book Depository / Waterstones
Thank you to the publisher for sending me this book via Netgalley in exchange for an honest review.
Rumi Seto spends a lot of time worrying. What to eat, where to go, who to love. But one thing she is sure of – she wants to spend her life writing music with her younger sister, Lea.
Then Lea dies in a car accident, and Rumi is sent to live with her aunt in Hawaii. Now, miles from home, Rumi struggles to navigate the loss of her sister, feeling abandoned by her mother, and the aching absence of music.
With the help of the “boys next door” – teenage surfer Kai, who doesn’t take anything too seriously, and old George Watanabe, who succumbed to grief years ago – Rumi seeks her way back to music, to write the song she and Lea never had the chance to finish.
With unflinching honesty, Summer Bird Blue explores big truths about insurmountable grief, unconditional love, and how to forgive even when it feels impossible.

All teenager Rumi Seto wants to do is spend her life writing music with her younger sister, Lea. However when Lea dies in a car accident that dream is lost. Devastated by her loss and feeling abandoned by her mother, Rumi is sent to live with her aunt in Hawaii. Rumi struggling to adapt to the loss of her sister and the absence of music soon befriends boy next door, Kai and the elderly George Watanabe. With their help Rumi attempts to find her way back to music and to write the song her and Lea never finished.
Summer Bird Blue is an emotional, heart wrenching read all about grief, dealing with loss and finding your way through such a terrible ordeal. It is written in such an evocative, powerful way that you will find yourself reaching for a packet of tissues and wanting to hug your loved ones tight. As someone who has dealt with the loss of a close family member this story really resonated with me and I felt like I could almost feel how Rumi felt.
This book is mostly all about music and how it can bring people together and help you deal with trauma and that is something that I totally agreed with all throughout reading it. As a big music lover I feel that music can speak to you in a way that no person can. Rumi’s huge passion for music, especially with regards to writing songs will touch readers everywhere. The full lyrics to Summer Bird Blue were honestly beautiful and I did find myself making up a tune to it in my head. Also, I found that the writing style was so poetic that at times it did feel like a song to me.
Rumi was a character that I found hard to warm to at first. I could understand that she had to deal with her grief but she was very rude to her aunt – who was only trying to look out for her and also her mother. I’m not condoning her mother’s actions for abandoning her, I just feel that Rumi should have spoken to her and not been so stubborn. Rumi was a brutally honest, blunt character and this made her rather complex on the whole. Mind you, as I read on I did find myself starting to like her as she started opening up to the people around her.
Rumi’s sexuality was also touched upon in Summer Bird Blue and I just want to commend the author for bringing asexuality to our attention. I haven’t read any YA featuring an asexual character before and I was in awe of how well it was tackled. I feel that Rumi will be a great role model for teens who are struggling to figure out who they are. It was just brilliantly done.
The friendships that Rumi made with Kai and George were definitely ones that she needed. With Kai, she found herself just acting like a teenager and in time opened up to him about her sister. Kai was patient with her and was there when she needed him. Their friendship was what true friendship should be. Her friendship with George was one that was unexpected. Both of them had experienced loss in their lives and it was heartwarming to see two people from different generations bond over their experiences.
Summer Bird Blue is a very character driven book and although I loved reading about the various character development I did feel like a plot was missing. I am someone who prefers a plot driven novel to a character driven one, so I did find myself getting slightly bored at times. I need a good plot to stick my teeth into and this was lacking in this particular book and did let it down for me.
Summer Bird Blue was a heartbreaking, poignant read that shows us how friendship, love and music can help us cope with grief and ultimately bring us that inner peace we all desperately want.