On 12th May I attended CHCC YA Fest for the second time. I went last year and absolutely loved it, so there was no question that I was going to be attending this year.
The event itself, is a small YA literary festival in Chadwell Heath (just outside of London, with great transport links!). It takes place at the Chadwell Heath Community Centre and Library, which in my opinion is the perfect place to hold a literature festival. It’s very small and intimate and gives off good vibes all around. I do like the bigger YA festivals such as YALC, but I felt more at ease at CHCC YA Fest as it was a lot more relaxed and you don’t feel as if you’re rushing about.
The line up this year was incredible featuring authors such as Alexandra Sheppard, Simon James Green, Chloe Seager, Gabriel Dylan, Sarah Ann Juckes, Yaba Badoe, Laura Coryton, Alice Oseman,  Kim Curran. and Kate Mallinder. I was really excited for the panels and to hear some of these authors speak about their work (and get some books signed!)

I arrived just before the festival was due to start so this was a good time to have a wander around, catch up with some friends and check out the swag table and Amelia’s Kitchen Candle stall. I picked up some bookish swag such as bookmarks, postcards, badges and a copy of Beautiful by Meredith Russo (we were allowed to pick one proof copy/ARC of a book that was on the swag table) and I also brought a lavender and tonka scented candle called ‘Sleeping Curse’ from the candle stall. It smells DIVINE and it’s helped me drift off to sleep quite a few times since I purchased it.

The first panel of the day was ‘Worlds Collide: When The Magical and Life Coincide’ featuring Alexandra Sheppard, Kim Curran and Yaba Badoe. I had read Slay by Kim Curran just a few days before the event and loved it, so was really looking forward to hearing her talk about the series! I’d also read Wolf Light by Yaba Badoe but I wasn’t keen on it, I was really interested to see what she said about the book nevertheless. The authors spoke about their books and the inspirations behind them, their favourite fandoms and how they value their readership. After the panel the authors were signing books and I got my copies of Slay and Slay On Tour signed, which was great! 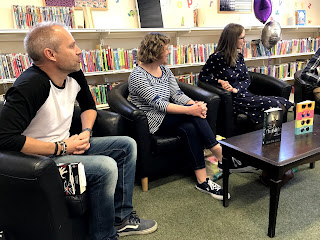 The next panel was the ‘Debuts’ panel chaired by Simon James Green and featuring debut authors Gabriel Dylan, Kate Mallinder and Sarah Ann Juckes. This was the panel that I had been looking forward to the most, as I’d read all of these authors books and enjoyed them all, so couldn’t wait to hear them speak about them. Each author spoke about their journey to publication, what their book entails and they also each did a short reading, which was fabulous to hear. I then got my copies of Whiteout and Summer of No Regrets signed and had good chats with both Gabriel and Kate. 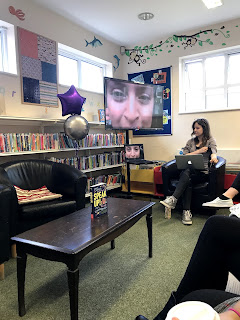 Next up was ‘In Conversation with Laura Coryton’. Unfortunately due to travel issues Laura was unable to make it but due to the wonders of modern day technology she was still able to talk to us via Skype. It was a really interesting conversation about ‘accidental’ activism, feminism and wanting to change the world. I left that panel feeling really empowered as a female. 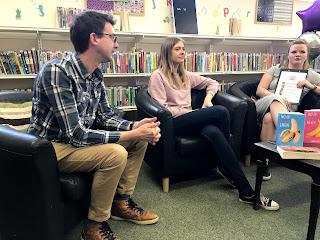 The last panel of the day was ‘LOL YA’ with Chloe Seager and Simon James Green and it was honestly HILARIOUS! I was laughing so much that my sides started to hurt. They both spoke about their teenage experiences that inspired their books, their writing and how they feel that comedy in YA fiction is needed. They also each did a reading, with Simon reading an excerpt from his new book Alex in Wonderland which sounded amazing! I then got my copy of Noah Can’t Even signed.

Unfortunatley, due to it being a Sunday and needing to get back to Ipswich for work the next morning I was unable to attend the ‘Art With Alice’ or the quiz. Which was a bit of a shame, but these things happen.
In my opinion CHCC YA Fest was even better this year than it was last year. All the panels were informative and engaging and everyone I met was so lovely. It’s such a relaxed, intimate event and as someone who suffers from anxiety that is perfect. Thank you for all the team for organising it and making sure everything ran smoothly. Here’s hoping it happens next year!
Did you attend this event? Would you attend it? Let me know!