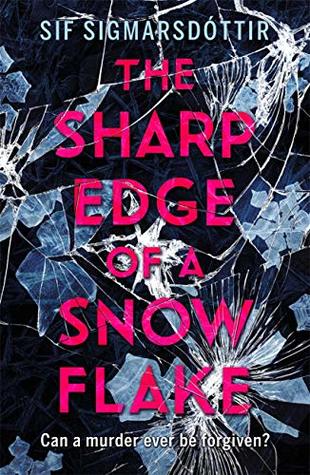 The Sharp Edge of a Snowflake by Sif Sigmarsdòttir

Hannah Eiríksdóttir has been banished from her home in London to a place of eternal punishment for the wicked. No, not Hell, but close: Iceland. There, she faces a new life working as a journalist for her father’s newspaper – a man she barely knows.

Imogen Collins has the perfect life as a social media influencer, showing off her glamorous London existence to adoring fans. But behind the filters lies a dark secret. She thought she’d buried it: But the Beast is back – a ghost from her past who’s threatening to ruin her future.

When a man is found murdered at the edge of the road in snowy Iceland the girls’ lives collide. Imogen had the motive. Can Hannah find out the truth, and discover the reality of the girl beneath the filters?

Trigger warnings: Sexual assault, violence, murder, mental health.
Hannah has recently been forced to leave her home in London to go and live with her father in Iceland. There she starts a new job, interning a journalist at her father’s newspaper. Imogen is a high profile social media influencer, showing off her seemingly fabulous London life to thousands of her followers. Behind all the instagram filters lies a dark secret, however, a secret that she though she’d buried until a ghost from her past reappears threatening to ruin her future. When a man is found murdered on the edge of a snowy road Hannah and Imogen’s lives suddenly combine in horrific circumstances.
I am really into YA Crime/Thrillers at the moment so I was instantly intrigued by The Sharp Edge of a Snowflake. Despite it not being very action packed, it was, quite a rollercoaster of a book that had me gripped for the most part. It does bring to light some important topics such as sexual assault, violence and social media. All of which were given the right amount of respect and not glossed over.
The plot, I found, to be rather thrilling although a little bit slow at times. It took a while for the action to kick in, but it was worth the wait for certain. I also really enjoyed how different topics such as family dynamics, journalism, sexual abuse and mental health were all neatly woven into the plot as well as the murder mystery. It added a whole new depth to the story as a whole and I feel that it was one of the main reasons that I continued reading. With regards to the murder mystery aspect of the book I found it to be pretty standard and the reveal of the murderer was somewhat of a disappointment. I am usually shocked when reading crime when the culprit is revealed, but with this one I felt indifferent. The ending was also something I had a problem with. It just ended so strangely and abruptly and I don’t feel like the story had been wrapped up properly. I was left feeling confused and deflated at the end.
The topic of social media was one that was prominent throughout the book and one that I found extremely interesting to read about. The notion that we put a different version of ourselves up on our social media profiles is one that is highly true in today’s society. Someone could be posting about their incredible life, when in reality they are facing hardships, just like Imogen in The Sharp Edge of a Snowflake. Also, the instagram posts that feature at the start of each chapter were genius! It was such a great idea of put the caption that was posted, as well as what that caption really should have been. It brought a very unique twist onto the entire book and was definitely a stand out point.
Hannah and Imogen as characters both had lots of depth that we discovered as the story progressed. Hannah’s worries about fitting in with her new family and her mental health are very much relatable. I found her drive and determination admirable and her way of telling a story was inspiring. Imogen, at first glance you would think she was going to be your typical diva, but as you discover more about her past you become attached to her. I felt sorry for her during most of the book and I really just wanted her to have a somewhat happy ending.
The Sharp Edge of a Snowflake overall, was an enjoyable read for the most part. It was well written and did have you wanting to read on at times. The topic of social media was probably the stand out point for me. However, the lacklustre mystery and confusing ending did bring it down a peg for me.

2 thoughts on “Review: The Sharp Edge of a Snowflake by Sif Sigmarsdóttir”