Amazon / Book Depository / Waterstones
I received this book free from the publisher in exchange for an honest review. 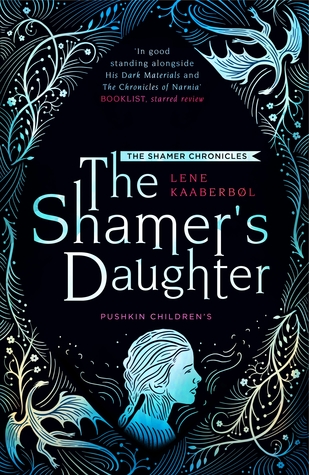 Dina has unwillingly inherited her mother’s gift: the ability to elicit shamed confessions simply by looking into someone’s eyes. To Dina, however, these powers are not a gift but a curse. Surrounded by fear and hostility, she longs for simple friendship.But when her mother is called to Dunark Castle to uncover the truth about a bloody triple murder, Dina must come to terms with her power–or let her mother fall prey to the vicious and revolting dragons of Dunark.

I do love a good YA/MG fantasy so I jumped at the chance to read The Shamer’s Daughter. The concept to me seemed fascinating and I was looking forward to discovering a new fantasy world, one of which I would hopefully enjoy.
The idea of a ‘Shamer’ really did intrigue me and it was certainly a power that I’d never come across in the fantasy novels I had read before. The thought of seeing someone’s deepest shame and forcing them to confess, well it’s definitely a unique power and I’m not sure I would like to have it. The way it is described throughout the book make it out to be a very isolating, yet pretty useful gift. You had Dina’s mother pretty content with it, mainly due to being able to solve crimes but then you had Dina who found it to be her downfall in being able to make friends and live a normal life. It evoked a lot of emotions within me.
The plot, I found was a tad bit predictable and was like many plots I had read in the past in fantasy. I’ll also admit that I had a feeling what was going to happen at the end, and I was almost right apart from a few minor things. This was a disappointment as I love to be surprised at the ending of books and this didn’t happen for me with The Shamer’s Daughter. However, I found the world of Dunark and its surrounding areas to be highly established and well thought out. It felt like a medieval setting and it was beautiful to read these descriptions. Also, adding Dragons into the mix was pretty awesome. In most fantasy when dragons are involved they are often seen as just mythological creatures, but in this book they are primarily animals protecting the castle of Dunark, which made them seem a whole lot more real to me.
Dina, was meant to be a 10 year old but I found that she acted more like a mid teen by the way she spoke and acted and because of this I found it hard to picture her as this child. However, I admired her determination and her fight, even if she had to be helped by older characters most of the time. Her relationships with a few of the characters within the book were beautifully formed and I found myself feeling pleased that she’d found people she could call friends.
The Shamer’s Daughter was a quick, fast-paced read with an interesting concept. This is quite low grade fantasy so I feel like it would be perfect for children aged 9 – 12.