Thank you to The Write Reads for allowing me to be part of this blog tour.

Fireborn: Twelve and the Frozen Forest by Aisling Fowler

Lyra. Lucy. Percy. Once in a generation, a hero emerges whose story enthralls readers worldwide.

Fireborn is an epic quest, perfect for fans of the His Dark Materials and The School for Good and Evil series, that will spin readers into a magical world like no other–and introduce them to an unforgettable new heroine named Twelve.

Ember is full of monsters.

Twelve gave up her name and identity to train in the art of hunting them–so she says. The truth is much more deadly: she trains to take revenge on those who took her family from her.

But when Twelve’s new home is attacked, she’ll find herself on an unexpected journey, where her hidden past is inescapably intertwined with her destiny–and the very fate of her world.

The world of Ember is wracked with Monsters, and a group of Hunters must fight them. Twelve gave up her name, identity and home to train in the art of hunting these monsters, well that’s what she wants you to think. She trains to seek vengeance on those who took her beloved family away from her. When her new home is attacked, Twelve finds herself on an unforeseen journey where her past seems to be interlaced with her true fate, and the destiny of this new world she’s found herself in.

Fireborn has been marketed as the Middle-Grade fantasy debut of the decade, and because of this, I knew I had to get my hands on a copy and read it asap. Middle-grade fantasy is a sub-genre that I adore, and to say I was intrigued by this new selection to the genre would be an understatement. With anticipated reads, you can be left feeling underwhelmed at times, but this wasn’t the case with Fireborn! I was instantly sucked into this incredible world, full of monsters, adventure and secrets.

As soon as I turned the first page I was captivated by this story. Everything about it had me absorbed and wanting to know more and more about this unique, fantastical world that Fowler had created. Granted, it took me a little while to figure out the workings of the world of Ember, but with any fantasy, even middle grade I feel that you won’t understand the workings of the world immediately. However, once I’d got my head around this, I was in it for the long haul, and honestly didn’t want to put this book down.

Plotwise, it kicks off almost instantly, and you are flung into the action not even 50 pages into the book, and this, I think was one of the reasons why I was so absorbed in the story. The rapidly accelerating plot does keep you on your toes, thus keeping you engaged and dying to know what happens next to this band of characters. One thing I must say is that Fireborn is quite dark in places, and you do start to wonder if some light will come out of this darkness. It’s a little bleaker than some other middle-grade fantasies I have read, but come to the end of the story you are left with hope, and that does change the tone somewhat. I also want to mention how the story doesn’t go the way you would expect, and the twists within it will leave you shaken. For one part I honestly couldn’t believe what had happened and it took me a few moments to compose myself with what I’d just read. This is a book that will have you wondering what will happen next with each chapter.

Twelve was such a fascinating heroine, that I know will inspire many young readers! At first, we see her as this feisty, angry type, and I know I for one was slightly worried if I was going to like her or not. Nevertheless, the more I discovered about her past, the more I felt for her and started to understand her. With what she went through in her past, there’s no wonder she had all this rage building up inside of her. Her love for her squirrel, Widge, was just beautiful. I’m a sucker for a good human/animal bond and I feel that Widge brought out that softer side of her, and helped calm her. Likewise, her slow-burning friendship with Five and Six was something that I felt helped Twelve, not only with the fight they had ahead of them but with discovering that she can open up and trust people, which was heartwarming. Come to the end of the book, she had developed massively and grown into herself, and I can’t wait to see how she grows in the next instalment.

Fireborn was an exciting, magical read packed full of adventure. Everything from the fast-paced plot to the incredible character development was done perfectly. For a debut, I was gobsmacked and I cannot wait to read the next part in Twelve’s story.

Aisling was born in 1985 and wishes that she had grown up in a magical, mountainous kingdom, but was actually raised in Surrey on a diet of books and Buffy the Vampire Slayer. Her early ‘adventure’ stories involved surprisingly little action and her first novel (3 pages long) was politely declined by publishers at age 11. After earning a BSc in Biology and working as a support worker and then a nurse, the idea for her debut novel, Fireborn, came to her as she moved back and forth between London and the US. Now based in Hackney, when she is not reading or writing, Aisling loves cooking and plotting adventures (for herself as well as her fictional characters). Fireborn will be published by HarperCollins in 2021. 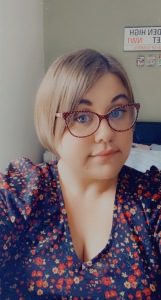