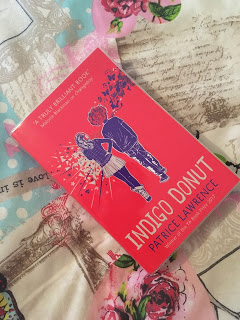 Indigo Donut by Patrice Lawrence
Published by Hodder Children’s Books
Released 13th July 2017
400 Pages
Paperback
Goodreads / Amazon
Bailey is 17, mixed race, lives with his mum and dad in Hackney and spends all his time playing guitar or tending to his luscious ginger afro.
Indigo is 17 and new to London, having grown up in the care system after being found by her mum’s dead body as a toddler. All Indigo wants is to know who she really is.
When Bailey and Indigo meet at sixth form, sparks fly. But when Bailey becomes the target of a homeless man who seems to know more about Indigo than is normal, Bailey is forced to make a choice he should never have to make.
A story about falling in love and everyone’s need to belong.
Thoughts
I read Patrice Lawrence’s first novel Orangeboy late last year and loved it. I fell in love with the realistic story and her writing style. It was a book that stuck with my for weeks after reading and when a book does that to you, you know its good. When I found out my YA bookclub was reading her second novel Indigo Donut for our August meeting I was so excited. I couldn’t wait to read another book by an author whom I’d come to admire.
Bailey is a 17 year old mixed race boy who lives with his mum and dad in Hackney. He spends most of his time tending to his amazing ginger afro, playing guitar and listening to music. Indigo is also 17 and new to London. Indigo has grown up in the care system after being found by her mum’s dead body when she was young. Now living with foster carer Keely, all Indigo wants to know is who she really is. When the two teenagers meet at sixth form sparks instantly fly. However, when Bailey is targeted by a homeless man who seems to know a lot about Indigo he is forced to make a decision he should never have to make.
What I love about Patrice Lawrence’s writing is how real it is. Her way of bringing realism to her stories is such a gift and it is probably one of the reasons I took to Indigo Donut so quickly. I remember being on the tenth page and being hooked. It had everything I could have wanted from a novel. It had emotion, it had a great storyline and characters that I fell in love with. At times it felt like I was watching a movie, it was just that realistic.
Indigo was such a complex character who I loved from the first moment I was introduced to her. There were so many layers to her that kept unravelling throughout the story. When you are first introduced to her she is very closed off and private. However, further down the line you notice her start to become more open about who she is. Her struggle to find out who she is is something we can all relate to but as her life hasn’t been the best you can tell how much it means to her as a person.
Bailey, oh I loved him! I found his character to be really loyal, loving and determined to do what is right for the ones he loved. Yes, he did make a few mistakes along the way but it was all in the name of trying to do the right thing. I found his family life to be somewhat of a mystery to begin with. You could certainly tell he loved his parents but there was a bond missing. The reason is found out further into the story but it’s still something that could be relatable to a lot of people. I felt that Indigo and Bailey complimented each other really well and it was lovely watching their relationship blossom. Indigo was used to men using her so it was so cute watching her fall in love with Bailey, who was treating her well. Their love for music was something that I felt was important. It ultimately brought them together and helped them to bond. Music is something that can be seen as a therapy of sorts for a lot of people and this idea was certainly conveyed throughout the story.
A lot of important topics were covered in Indigo Donut, such as family, bullying, love, alcoholism, prison and identity. All incredibly important issues that can be seen as sensitive to some. Patrice tackled these issues in a way that couldn’t be seen as trigging to readers. These issues need to be spoken about and it just added to the realism of the plotline. I applaud her for that.
Indigo Donut was an amazing read and a book that I would most certainly read again. The realism of it was what sold me, as well as a great storyline, loveable characters and the introduction to some rather important topics. I, for one, cannot wait to read what she writes next.
Rating 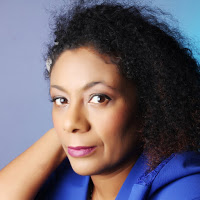 Patrice Lawrence was brought up in an Italian-Trinidadian household in Mid Sussex. This meant great holidays and even better food. She found her way to East London is the ’90s and lives there with her partner, a teenager and a cat called Stormageddon. Her first novel, Orangeboy, won the Waterstones Book Prize and has been nominated for many awards, including the Costa and YA Book Prize. Her ideal mixtape includes drum’n’bass, Bruce Springsteen and music from Studio Ghibli films. Music can’t help creeping into her books.
Blog / Twitter / Facebook