Thank you to The Write Reads for allowing me to be part of this blog tour.

What Beauty There Is by Cory Anderson

When everything you love is in danger, how long can you keep running to survive?

Life can be brutal
Winter in Idaho. The sky is dark. It is cold enough to crack bones.

Jack knew it
Jack Dahl has nothing left. Except his younger brother, Matty, who he’d die for. Their mother is gone, and their funds are quickly dwindling, Jack needs to make a choice: lose his brother to foster care, or find the drug money that sent his father to prison.

So did I
Ava lives in isolation, a life of silence. For seventeen years her father, a merciless man, has controlled her fate. He has taught her to love no one.

Did I feel the flutter of wings when Jack and I met? Did I sense the coming tornado?
But now Ava wants to break the rules – to let Jack in and open her heart. Then she discovers that Jack and her father are stalking the same money, and suddenly Ava is faced with a terrible choice: remain silent or speak out and help the brothers survive.

Perfect for fans of Patrick Ness, Meg Rosoff and Daniel Woodrell, What Beauty There Is an unforgettable debut novel that is as compulsive as it is beautiful, and unflinchingly explores the power of determination, survival and love.

YA Thrillers are sort of my thing at the moment, and I just can’t get enough of them. So, when I heard about What Beauty There Is, I knew I had to read it. Just from reading the synopsis, I had a feeling it was going to be a book that I would be both intrigued by and addicted to.

Jack Dahl has nothing left, except his little brother Matty, who he’d do anything for. Their father is in prison and their mother is gone, and the little money they do have is running low. Realising that Matty will be taken into care if he doesn’t do something, Jack chooses to find the drug money that sent his father to prison. Ava is being controlled by her criminal father and has been isolated for seventeen years. Her father has controlled her and she trusts no one. However, when Ava meets Jack she starts to realise that she could maybe open her heart to him. What she doesn’t realise, is that her father and Jack are chasing the same drug money.

This was a tense, gripping read that also packs an emotional punch and does leave you teary-eyed at parts. You honestly become so invested in the story and these characters that you start to feel a personal connection to them, and you start rooting for them to get their happy ending, despite everything. I found it hard to put this book down at times, and even when I did, I found myself thinking about the characters and their stories. What Beauty There Is will most certainly break your heart, even if you don’t get emotionally impacted by stories.

.The plot itself was fast-paced and took place over a few days. This, in turn, was one of the reasons why I found it so hard to put down. Almost every chapter had action within it and ended on a cliffhanger, which was so compelling and addicting. The dual storytelling between Jack and Ava allowed you to get into both character’s heads and understand what both characters were going through and see their conflicted emotions. I love dual narration when it is done right, and in What Beauty There Is, this was executed perfectly. I feel that if this was told just through the eyes of one character it wouldn’t have had the same effect on the reader. Throughout the story, there are also many twists and turns, and you honestly don’t see the climax coming. As soon as I’d reached the end, my mouth was wide open in shock and disbelief, so much so that I felt broken.

The relationship between Jack and Matty was both heartwarming, and devastating to read about. Both boys had been through such a lot in such a short time, and you just wanted to pick them up and look after them both. Jack’s determination to protect Matty is brotherly love at its finest, and you can tell how much he loves him. Matty is naive, and at times doesn’t understand what is going on, and it’s up to Jack to reassure him that everything will be okay. Jack and Ava’s relationship was one that I felt never really got going, and due to the fast-paced nature of the story, I felt like we didn’t get to see it blossom. It all seemed to move a bit too fast for me. I would’ve liked to have seen more scenes with just the two of them, so we could understand their relationship a bit better.

What Beauty There Is was an intense, thrilling read that gripped me. Its accelerating, adrenaline-inducing plot made for exciting reading, and I cannot wait to read more from Cory Anderson in the future.

Cory Anderson is a winner of the League of Utah Writers Young Adult Novel Award and Grand Prize in the Storymakers Conference First Chapter Contest. She lives in Utah with her family. What Beauty There Is is her debut novel. 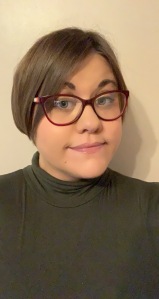 Welcome to my cosy bookish corner of the internet!
I’m Amy. A twenty something award nominated book blogger living in Ipswich, UK. I spend most of my time reading, drinking coffee and trying to finish writing my novel.
I am currently accepting books for review.

#EasterReadathon2021 hosted by @readingthroughinfinity kicked off today and I’ve already managed to get some reading done! I have taken part in this readathon for three years now and I always look forward to it. I think my TBR is pretty manageable too, so that’s a plus! 🐣
The incredible Mina and the Undead by the wonderful @yaundermyskin is released today and trust me, you all need to read this book! It’s the perfect YA gothic horror, and one that you will all be entranced by! The link to my review is in my bio 🧛‍♀️🧛‍♂️
Look at how beautiful this is! I’ve now finished the first three books in the ACOTAR series and they destroyed me! I couldn’t get enough of them and yes, I am on team Rhysand! I am hoping to read ACOFAS in the next few weeks and I cannot wait!
The wonderful guys at @usborne_books sent me this gorgeous proof of The House of Serendipity. It sounds like such a fun middle grade read and one that I am very much looking forward to diving into! #gifted.
#Gifted the lovely @ghazalcorner sent me this gorgeous personalised coaster and bookmark set made from resin and I love it! It’s so beautiful and fits my aesthetic nicely. Do make sure to check out their Etsy store - they’ve got some wonderful stuff on there.
‘Murder On The Safari Star was yet again another incredible instalment to a series that has cemented itself as one of my favourites.’ This is the third book in the Adventures on Trains series and it’s such a fun, middle grade series which I love! This one was set on the Safari Star and when there’s a murder onboard, it’s up to Hal to solve it! Everything about this book was incredible and if I’m being honest it’s my favourite book in the series so far! 🚂
Hello lovelies! Today is my stop on #TheLastBear bookstagram tour hosted by @kaleidoscopictours! I adored this book and I will leave a link to my review in my bio. For the tour, however, I am sharing a guest post by the wonderful author @hannahgold_author, which you can read in the comments below 🐻‍❄️
Happy #WorldBookDay and happy publication day to Show Us Who You Are by @booksandchokers! I cannot wait to dive into my copy - I’m incredibly excited. If it’s anything like her first book, A Kind Of Spark, I know I am going to adore it 💖
‘The Girls I’ve Been was an electrifying, heart-stopping, thrilling read that left me breathless the moment I finished the final page.’ This was such a great YA thriller that was unlike any I’d read before. It was so thought out and intricately plotted that I was hooked on it. Definitely one to have on your radar for sure! This earc was kindly #gifted to me from @teambkmrk.
My Tweets